“The proof of desire is in the pursuit.”

I once read a story about a spiritual Bounty Hunter, and although that story was not scripturally valid, it did spark a vision in me that set me on a quest. And what did I find?

Are you prepared to become a Bounty Hunter, too? I find it hard to believe that anyone who believes in God would turn down the chance to be his bounty hunter, once he has seen the truth. I find it amusing that God even timed the release of this message to coincide with Thanksgiving, a holiday, even holy day, for some, to give thanks for God’s bountifulness in our life.

There are two major aspects of the word, “bounty”, of which both apply equally to the spiritual Bounty Hunter.

1.) Bounty… as in a bountiful supply…abundance.

2.) Bounty… as in a reward… as in a bounty placed upon the head of a criminal, to be paid, (rewarded), upon capture.

For the spiritual Bounty Hunter, both aspects of the word are equally relevant. Consider these scriptures:

(Psalms 13:6) “I will sing unto the Lord, because he hath dealt bountifully with me.” (Does anyone desire for God to deal bountifully with them? Then you are a seeker of God’s bounty. The only question is, just how much of a seeker, or hunter, are you?)

(Psalms 142:7) (This one is VERY interesting. Here it is in the Amplified version.) “Bring my life out of prison, that I may confess, praise and give thanks to Your name; the righteous will surround me and crown themselves because of me, for you will deal bountifully with me.” (I understand this to mean that the anointing, blessing, of God can be so strong on a person, that others will be drawn to that person, in order to get into that blessing for themselves, as in those who were drawn to David when he was on the run from King Saul.)

So how does the spiritual Bounty Hunter apprehend the bountifulness of God? He is a hunter, and the first person we hunt is God!

(Hebrews 11:6) “But without faith it is impossible to please him: for he that cometh to God must believe that he is, AND THAT HE IS A REWARDER OF THEM THAT DILIGENTLY SEEK (HUNT) HIM.”

THE PROOF OF DESIRE IS IN THE PURSUIT!

Seek ye first the Kingdom of God… as we are faithful to that path, like a tracker hunting his prey, God’s bountifulness will begin to come upon us, and we will begin to know a boldness and fire we have not had before. That anointing has to go somewhere. Soon we will want to move to the second part of the definition of our word, bounty, and that being to hunt some bad guys, “the” bad guy, and cut him off at the pass, ruin his day, seek a spiritual revenge, as Paul spoke of. But that is for the next message.

As for now, meditate and pray about what it means to hunt God, and seek his bountifulness. I believe God wants to raise up a Holy Ghost posse of Bounty Hunters, to counteract the actions of a devil running rampant upon this spinning planet.

This planet is not my home, but as long as I am here, the Spirit of God in me wants to make a difference! When I am weak, then am I strong. The sheep becomes the hunter because of the Shepherd, but I must never forget, that even though I get to live as the hunter, I am but a sheep. We Christians are a collection of paradoxes that only work because God is God, and he makes them supernaturally work. Amen.

On this Thanksgiving, give thanks to God for his bountifulness to you, and take up the calling of God’s spiritual Bounty Hunter. Hunt God with all your heart, and know that it will lead to even greater things. 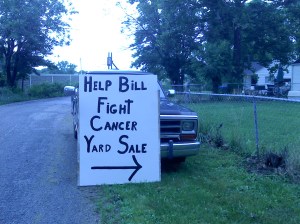 We raised a total of $1,600 for Bill. He was in stage 4 when his cancer was discovered. Now it has shrunk to a size that they will soon remove by surgery. Keep Bill in your prayers; victory is in sight!

A different kind of Lone Ranger and Tonto 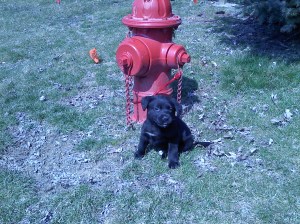 Yes, it is hard to believe she was ever that small, but now she is seventy-five pounds of dedicated dog. She hangs with me everywhere I go. She shadows me. We are bonded. She would protect me with her life. We go swimming together in the creek. We are buddies, partners, and pals. We are a different sort of Lone Ranger and Tonto.

This is a strange way to introduce what will be the new theme of this blogsite, that of a Lawman, a spiritual Bounty Hunter. Donald Miller wrote a story. It spoke to me and I have not been able to get away from it. As a child I remember a Baptist preacher preaching against sin, and he was not afraid to call black, black, and white, white. He was not afraid to speak of Hell and consequences, but as I grew older the Church slowly evolved into the subject of grace, grace, grace, and very little about God’s laws. Now I see myself living in a day when morality is caving and the devil runs rampant. We have lost the vision of what it means to “ARREST” the devil.

Jesus asked how can a man spoil a strong man’s house, unless he first bind (arrest) the strong man?

I’m not going to get into this deep at this time. I’m only going to put it out little by little. I will go days without even checking this. You all can debate what I write between yourselves if you like. It don’t matter to me who agrees and who does not because the ones who “see it”, they will be the ones who “grow” by it, and find power to “arrest” the devil. I intend to write for the ones who “see it”, become convinced of it, and continue reading because they know it is a needed word to balance out all the “GRACE” preaching going on in this day of loose morality.

I will end this first article with two simple statements:

1.) The land of WISDOM has boundary lines. If we choose to live in wisdom, anointing, power, love, and freedom, we learn where the lines are drawn and live within them, as much as possible. And where we fail? That is where grace comes in. Grace is not a license for us to ignore boundary lines that God has set. Do we even know them any more?

2.) God’s love, without God’s laws, is not God’s love.  If we know how to be good parents, how much more does God? If you live on a busy road, and you love your children, you put up a strong fence! Since there are so many experts on grace these days, I’ve decided, at least for a while, my subject shall be “Lawman Theology”.

We have been redeemed from the CURSE of the law, but the BLESSINGS are all still there! Living within the lines of your authority and jurisdiction, is the greatest freedom of all. All the Bible greats loved and embraced God’s laws. Psalms 19:7-11 is a great example of this. David was a man after God’s own heart!

Maybe that was three statements, but know this, the Bible speaks of the “Lawless one”, and the “mystery of lawlessness”. These things are developing right before our very eyes. The devil needs to be arrested. In our own life first, and also in the life of others, if we are EVER to know true freedom.

GRACE WILL NOT ARREST THE DEVIL, BUT ONLY THE LAW, SPOKEN IN THE NAME OF THE ONE WHO FULFILLED ALL THE LAW. I believe little by little, I can make an excellent case for this. The law has not passed away, but by grace we have been made fit to arrest the devil, if only we know how. Much more to come!

We live in a material world, and we spend our life learning physical skills that enable us to excel in the pursuit of all the good things life has to offer. What if a Spirit Being created a spiritual world in which all the good things are not material, and the path to those things are not physical at all? Could there be a powerful supernatural way of living in which all things orbit around God, and not our self, a way as different as the life of an eagle to that of a sparrow? And if so, how does it work? Don Allen is a teacher/writer who loves to weave spiritual truth into his fictional stories. He believes stories are the greatest teachers. Feel free to hit your printer button, copy stories off for ease of reading, and pass them around! Hope you enjoy.